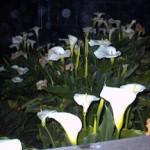 To be historically accurate most “martial arts” currently taught are not martial arts at all.

Nowadays, when people think about the arts a kaboodle of things comes to mind. First is, of course, self defense (or even, for some, just plain street fighting). For others there is a health aspect. And finally, especially since its acceptance through movies and TV, there’s the idea of performance (“My kid’s a tournament champion. We’re attending auditions now.”)

All of these are perfectly valid pursuits but they betray a misunderstanding of the martial mind in general and Kung Fu specifically.

So what about “real” martial arts? Well, you’ve already read the answer in the title: generalship. Someone learning to fight off one attacker is learning in essence to fight like a foot soldier (an honorable pursuit in itself, surely) not a general. A general has to consider fifty things at once. A soldier fights his way out of a bad situation. A general asks why the bad situation even arose.

As has been pointed out on many occasions, a general thinks strategically, a soldier tactically. This is not just my personal opinion but historical fact about the arts. Kung Fu, for instance, was highly respected in old times not just because it was a formidable self defense but because it was one of the two ways to advance in life: the other being civil service. One could basically have a military or scholarly career (as in Europe for a thousand years). A Kung Fu practitioner could literally work his way up to the rank of general through the application of his strategic sense and training.

This was reflected in the methods of practice. Where the modern martial artist may spend a good part of his life punching a bag to develop one good knockout blow, the traditional practitioner may perform a complicated series of actions to coordinate all her limbs. An example might be one such choreographed sequence, hundreds of years old, known as the Ambush Fist. In this form ( a series of martial moves strung together) the player moves in one direction while simultaneously holding a limb behind her back, out of sight. The Kung Fu student must never “forget” this limb and let it sag or drop. While attending the world of the visible (Yang) she must also keep attention on the world of the hidden (Yin) just as a general develops the sense of all factors in battle: overt and covert.

In other words the basic study of martial arts is about consciousness not kicking. But this is a consciousness which is not abstract. It plugs directly into instincts which we think of as being the opposite of consciousness like the survival sense or aggression. But it accepts and embraces these instincts only to try and transform them. The general senses the constant change of life and adapts efficiently. Like a misty battlefield in the morning, everything is information, perception, omens – and courage. “There is no courage like that of 3 a.m.,” said Napoleon.

A student of proper martial arts is therefore a student of a way of thinking. Sports-like attitudes are often just pale imitations of this “wider vision” which, as might be expected, fills the life of the practitioner with sights, sounds and revelations from the periphery of normal perception, and that other world hidden in this one.