I have a scroll in my studio, hand-drawn in Taiwan just for my student body. It says, in essence, “One Hundred styles all come from Shaolin Kung Fu”.

This may be an exaggeration but there is some truth here. Many styles proudly trace their lineage back to this 1500 year old style. And we don’t mean just styles from China. There is a famous Okinawan Karate style known as Shorin Ji which translates as “Shaolin Temple.” A big Korean style was known as Tang Soo Do which means “The Hand of China.” In fact the original characters for Karate itself also mean, “Chinese Hand”, a direct reference to Shaolin Boxing. 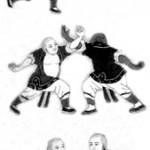 Why is Shaolin so famous and popular? Well, historically Shaolin was originally a Taoist tale that became the abode of Boddhidharma when he brought his brand of Buddhism to China. Though most people consider Shaolin Temple a place Buddhism the actual form of meditation and thought there is a “marriage” of Chinese Taoism and Indian Buddhism. This child is so famous even people who known nothing about religion have heard of it. In Japanese it is called: ZEN.

Shaolin is the birthplace of Zen. But there’s more to it than that. Shaolin is one of a group of styles known as a “water” form. You might think that this means we’re fluid when we move, but – no. That’s not it at all. A “water” style is a style from which you can make anything else. Coffee, hot chocolate, tea: they all start with water. Shaolin is a perfect water style because from it you can go anywhere in martial arts, do anything. Some styles are not like this. If you want to change you have to start over again.

What kind of training does this “water” style encompass? The range is enormous. Exercises not only for strength training, flexibility, balance and grace; but also for correcting and rehabilitating all sorts of problems. There is self defense work of all kinds: grappling, striking, multiple opponents. There is a performing art form of great beauty. Massage and rejuvenation exercises abound. And of course, on the spiritual side, there is a whole regimen of meditation, chi kung and philosophical studies. A lot of information? In many styles it takes about two years nowadays to get a black belt. A Shaolin instructor takes at least five years just to get the basics. But it’s time well spent because there is so much to known, so many worlds to explore.