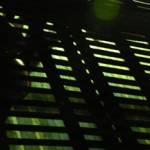 Clouds pass and cast shadows over the cubicle. Night and day gallop one after the other but go unnoticed. Rains wash it, leaves drop on it, snow slides from it. Like Rip van Winkle it sleeps.

Inside the illuminated bubble the solitary figure huddles before the computer screen. He could be the only man left on earth or one of untold billions.

If he has to go out in his shadow-windowed vehicle he listens to music or talks into his mouthpiece. The passing scenery and stream of vehicles is no more real to him than the video on his wall at home, concealed to look like windows: loops of forest, seashores, tundra.

His voting record is consistent – with consistent political theories of his own creation. He pays wholesale for everything because he never goes to a store or deals with real people. Once in a blue moon he “parties” with others but the drugs and drinks are out immediately because, deep down, he thinks all his contemporaries are “a-holes.”

His prescriptions are sent to him. His opinions are aired for him on the talk shows. Sometimes he yells at the TV. For exercise he has a machine. He wants to look like the characters on TV because they look like their bodies are encased in chain mail. But sweets are too cheap – solace too near. He works almost constantly. He has not read a book in decades.

In the bubble he is the nerve center. Wires all converge near his chair.

The odd thing is that, though his armor seems flawless, it leaks. When things break down he is immediately helpless. The rudeness he sees around him – even the slightest divergence from what he thinks is right – drives him into a fit and sends him back to the bubble for days.

Outside the social world is disintegrating. Gangs cruise the streets. Despair cracks the walls like a blight. Sounds are maniacally unreal: crashes and concerts intermixed. Armies change their colors, occupy countries with unpronounceable names. The government does what it wants because it owns the voting software. The difference between his world and the Matrix is that the Matrix had a point to it.

The Buddha was not entirely correct. The source of all pain is not only desire; it is the belief that there is nothing beyond your own condition. Continuing with the reference to Buddhism, salvation is completely individual but it is based on the idea of a systemized universe. Even belief about “what’s out there” has this foundation.

In many Asian practices this conflict between the personal and the universal viewpoints is resolved by a spectrum of explorations: meditation, martial arts, painting, poetry, astrology, literature and philosophy. The purpose of these is exactly the opposite of exercise. Exercise makes you stronger. These disciplines sensitize and involve you. If we were talking about wine we would say exercise lets you drink more but these disciplines let you taste more fully, more deeply. We have the armor. We need to remove some of it or we will not be able to do anything but clash, or hide.