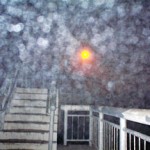 In this season, the rains come, cleaning the air as though the world were taking a fresh yearly breath and clearing its lungs. The air, the winds, the climate, the atmosphere, were to the ancients, all forms of Ch’i, or vital energy. A lot of people have heard of Ch’i Kung. Literally, this phrase means “practicing with Ch’i”, and refers to one’s personal inheritance of life force. But there is a more expansive term, “Tian Ch’i”, translating as “Heaven’s Ch’i”. This refers to the ubiquitous and lively soup of energies surrounding each living thing on earth.

In recent years people have talked a lot about conservation of the environment. Though admirable in many ways, the concept still implies a modern viewpoint; a separation of human and milieu as though we could save or destroy something from ourselves. But to the ancient mind this separation is thinner than tissue. When the Ch’i Kung practitioner rises in the morning and practices his regimen he is, with every breath, exchanging his personal store of breath for the Heaven Ch’i in which he lives.

One of my favorite paintings, and indeed a classic of Chinese art, is known as “The Joy of Fish”. It is an underwater scene where carp cavort with one another, playfully circling. More than just an exquisite painting, this piece is meant as a reminder. So accustomed are the fish to their environment, they would never imagine another. In one sense they are completely unaware of that medium which surrounds and supports their lives. And yet, they’ve gone most humans one step better, for in thisÃ‘to themÃ‘invisible environment they have learned to play with the medium itself.

At its best times, the practice of T’ai Chi is said to resemble “swimming in air”. At those moments we emulate the spirit of the fish swimming in the wold off Ch’i, feeling the imminent sensuality of their own lives; yet extending their awareness all through the water. Even to the surface and its momentary changes.