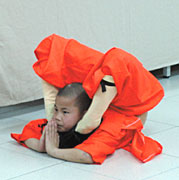 Martial arts, that is matured martial arts, stands like a firm table on four strong legs. It helps tremendously to know what they are and how these four points interact. Of course different people will have different interests. Some will only concern themselves about self defense or fighting, some will gravitate to internal practices or art. But an ancient and complete practice offers options that may vary not only from one person to another but within each person’s life. Anything less is not the art of Kung Fu.

COMBAT: Obviously, martial arts has fighting technique. But those who say it’s only an art and not “real” are just being silly since it has weathered 3000 years of full on combat in conditions which would make most present day fighters sick. On the other hand self defense alone is not martial ART, unless it has more than immediate, paranoid concerns.

ART: If there’s not beauty in life there’s very little to defend. The Art of the Martial has developed a fascinating and world admired esthetic which anyone can share. Individual, group, partnered, parallel practices all exist for the artistic expression and enjoyment of people. On the other hand if the martial is completely missing so is the interest. Martial grace has to demonstrate martial meaning.

HEALTH: Optimal health, in modern consciousness, is often cosmetic, social, competitive. Health in the martial sense preserves centuries of wisdom, and experience. So many health regimes only work for a narrow band of person at a certain age. Since the martial arts are so varied they are also adaptable offering a practice that can last a lifetime and never be boring.

TRANSCENDENCE: Contemplating the impermanence of the mortal and the contingencies of fate offers us a sobering view of our own frantic lives. One of the most important aspects of martial training, continually overlooked, is the way in which it brings the immediacy of our lives to the front without necessitating the danger and tragedy we often need to understand our own depths. Zen adepts in Japan sometimes said that martial training could be a superior path for some to meditative realization. Of course all and any tools are needed for each individual to freshly taste his or her own life. These are the four legs that hold up martial practice. At no given moment will they be exactly the same, but a strong foundation and a bright future in the arts depends on all four.