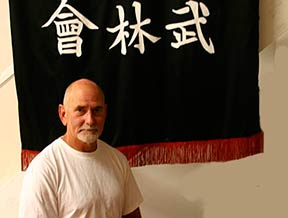 Peter Thelin, a Tai Chi Chuan teacher here at the Academy and a student of Ba Gua Zhang, recently left us after studying and teaching here for many years. Much loved, he was a light and an inspiration to Academy student.

I interviewed him before he left about his association with martial arts.

Peter grew up in Massachusetts. His intellectual, esthetic and emotional roots were formed in the fertile culture of Amherst, a town that had housed the likes of Daniel Webster, Emily Dickinson and Robert Frost. There the New England appreciation of nature and poetry made its imprint on him. His formal education was in Berkeley during the late ’60’s and 70’s where he studied resource economics: water resources, rural development and systems theory. He has been teaching economics at West Valley Community College for the last 35 years. He identifies himself strongly as a teacher and says his classes are “technically rigorous and intellectually challenging”, yet gentle.

Peter wrestled, boxed and played water polo in his youth. Contact with the martial arts came in his maturity. He started training with Shi Gung (Grand teacher) Wing Lam in Sunnyvale where he learned Sun style Tai Chi. After nine months, however, he was forced to quit due to a series of knee surgeries. In 1995, he moved to Santa Cruz. “By chance or fate, I found Ted and the Academy and have been Ted’s student ever since.” Peter says that whenever he had studied under a mentor, he has tried to commit deeply. He often finds the wealth of experience and knowledge offered by these people overwhelming. But, “when I commit to a task, I immerse my totality into it.” He has also studied acupuncture from Master Yoo Hee Suk.

I asked Peter what he feels is his most difficult obstacle in the martial arts. His response: overcoming himself and his preconceptions of what he can do. When asked what he especially likes about martial arts he said: “Martial arts touch the whole of one’s person. Ted’s approach encourages us to know ourselves and extend ourselves. One’s cultural, mental, physical, artistic and spiritual dimensions are all called to task.”

Peter went on to say that martial arts teaches a person to listen – to sense what’s present – and to respond appropriately. He illustrated with a couple of situations which occurred while he was swimming in the ocean. In the first, he encountered a bull sea lion rising out of the water about 4 feet away from him. Both Peter and the sea lion were startled. “My gut told me to create distance, which I did. Giving him space calmly and purposefully eased the tension.” In the other example, a harbor seal literally bumped into him while he was in the surf. He said they became “friends” and would often ride the waves together. The harbor seal even let Peter touch him. “These experiences with wildlife were possible in part because of my martial training — because of being able to sense the possibilities and exploit them. The trick is to do so gracefully, which is a primary quality of artful living.”

Peter summarized his formal training with the following: “My academic studies and my martial studies have many commonalities. Each has an intimate connection with the concept of efficiency. Each has a strong notion of what is natural and appreciates the utilization of what is perceived as such. Each has a strong sense of studying or listening to the situation prior to action. Each has proved to be useful in the practical engagement of the world at hand, yet each fostered a desire for more and loftier ambitions.”

Peter recently retired from West Valley College. He is currently supervising the building of a house on his property in the San Juan islands. He plans to teach Tai Chi to the community there, while continuing his association with the Academy. Everyone who knew Peter felt his warmth, humor and kindness. We all wish him the best in this new phase of his life.

This entry was posted in Profiles and tagged Bagua, Tai Chi. Bookmark the permalink.