Pirates and Prevaricators, the truth about rank

I hear this all the time, two sides of the same story. ” ‘Black Belt’ doesn’t mean a thing!” And, on the other hand, “He is a Grand-master of the XYZ system!” To say that the “civilians” don’t understand much of this rank system stuff is an understatement. How could they?“ It’s a cross between a beauty contest and liar’s dice with not a lot of truth in the middle.

This is the sad state of affairs I was considering one day when I realized how simple the answer was, the general populace simply needs a code book to decipher all the flack. This may be my version of the code but I assure you it is a representation of what most hard-practicing authentic martial artists think of the whole situation.

Let’s start with those belts to hold up your pants.

A black belt is like a stock certificate, its value depends on the name of the company from which it is issued. A black belt meant and means, technically, “no longer a beginner”.

Degrees of black belt can be political awards (service to his style and students) accrued time in the arts. The best rule is the number of years for each rank between those ranks. Three years more to third degree, six years more to sixth degree, etc. So, if you have an eighteen year old seventh degree well,… no. The point is that a simple black belt from a responsible teacher does mean something. The others are wall paper.

(Children ranked black and above are, frankly, an embarrassment to the majority of the martial community. It is an acknowledgment that the persistent hen-pecking of parents won and the teachers folded to the pressure. When will my Joey get his black belt? is no reason to award them. How much would you respect a PhD. in physics from some backwater school in China given to twelve year olds because Western academic standards there are unknown and the parents want the kids to look good?

The Belt problem comes mostly from the commercial side of the aisle. People regularly gain rank by begging their instructors to up their degree so they can be more competitive in the market place. (This is no fairy tale, I know a number of ranks like this. Sometimes they are at least qualified as “commercial ranks” but that little distinction often floats away with time. I’ve been offered on a number of occasions the rank of 5th or better. In each case the ulterior motive of this compliment was to get me to promote others to a higher degrees and insure loyalty.)

Masters of the Universe!

It’s not a martial example but it is a great one. You will often hear people referred to as a Reiki Master which is, essentially, poppycock. Again we are trading on a word. The first problem here is how do you become a “master” in some art developed by ¨someone in the 20th century who decided he was a Reiki master? Someone once grabbed his sleeve and informed Robert Frost that he was a poet, too. Frost shook his head and said that the word “poet” was a gift-word and you don’t give it to yourself. How exactly do you count a gift of being called a “master” when you have to pay 200.00 for it? Answer, you don’t.

The word “Master” is particularly objectionable in a number of ways. It is not a translation from an Asian language unless you think “noodles in water are boil” is a good translation of the back of your Ramen package. Master is a qualitative not a hierarchical word. Some styles like TKD automatically give it to black belts above a certain rank. This is the heart of the problem.If it is a technical word like journeyman then it really has very little value. Going back to Reiki all it shows is what low standard (move a little energy, something a five year old can accomplish) and high social aspirations are in conflict. It is a sad commentary on one’s standards. The Chinese, in typically dry humor, say, “Call yourself a master and practice alone”. Meaning if you are all that good who could dare enter into your illustrious presence? So go away. I have a personal solution. I don’t care what other people call me, but I never refer to myself in such a manner and that’s after forty years in the arts.

(Just as a side car, there are other wrinkles to consider. Ed Parker, a devout Mormon, used to say that there was only one master and that was Christ. Whatever your religion this is a pretty classy objection. I might expand it to calling the Buddha the Master but not a guy who punches a tire all day. One of my friends and a helluva fighter had the distinction of closing down an entire tournament after getting peeved that all the black competitors were “master-ing” this and that senior Korean teacher. He just couldn’t take that many black people saying the word. People do take offense. Personally my skin crawls whenever I hear the phrase with rare exceptions.)

Grand Master and Great Grand Master, etc. GM actually has two very technical designations. The first is that you are the surviving lineage holder of a style or branch of martial arts. You can be designated by the previous generation or inherit by default (a trickier proposition). It can also mean you are the founder of a style though, precisely put, I believe founder is more accepted and  more accurate.

Being a GM is a pain. I have a good friend who is probably a GM and is pending a large part of his later years preventing poachers from declaring their own, fallacious master-ships. He doesn’t even want the title, but in loyalty to his departed and it must be said a somewhat “opportunistic” teacher he inherited a political cat fight. According to my friend the first generation of student who stuck should all share in the title collectively. But then you have multiple GM’s: another problem.

It should be obvious that this is not so much a commercial thing as an ego thing. A fellow teacher just told me about meeting another martial artist a while back. They hadn’t seen each other for years. My teacher friend asked how the other one was doing and got the reply, “You know I’m a grand master now. I’ve founded my own system.” “Well, how nice for you,” was my friend’s thought. Again the problem here is  of devalued lineage. Creating your own style of martial arts is sort of laughed at in Asia and because we like words like “new” and “improved” in the west a big deal here. It’s not like the days when you would definitely have to defend your ascension tooth and nail and I mean with your life. Such challenges are illegal nowadays and the attitude is, what the heck, everyone has to “fill his rice bowl.” Ancient martial artists did not run around calling everything a style. There are about 350 styles of Kung Fu but that’s dispersed over more than a 2000 year span. You do the math. Only in America do we have multiple versions of a “WorldChampionship”. 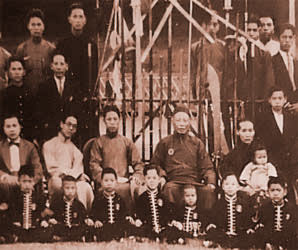 Basically, anyone can pirate anything and call it a style. The older generation often resorted to calling what they did a this or that style out of respect for their own teachers. They didn’t want to claim anything that could reflect poorly, sort of like saying, This is MY version of things don’t blame my instructor. One of my teachers, a widely respected instructor, will indeed leave a “style” behind him even though he is only trying to teach correct Kung Fu. The problem is that there is so little of it now that his method will end up being unique enough to be designated a style. That is a founder, not these self-promoted mediocrities.

The term “professor” came mainly out of the Hawaiian martial scene. In those tough years you had to be very careful what you claimed. A number of top notch instructors decided to use the title “professor”. It was a version of sensei or teacher. People often associate this with GM but, in reality, it is just a title. Think about it. A professor means a teacher. Since I have taught at the university level and am a professor and most of the current group, technically, are not. Really it is not a very important title now especially since it has devolved from greats to some very small people.

Sifu, that’s not a fish dish.

This is interesting. In Northern China it bears the original meaning, namely someone who has a hands on skill (not book learning, Otis) and may guide you through that or not. Bus drivers, chefs, taxi drivers, massage teachers and Kung Fu instructors are all Sifu. In Southern China more respect is given and the term could have a fragrance of “master” but that’s an individual choice. A Si Gong is your teacher’s teacher. Sifu and Si Gong are family terms like “uncle” and there is a little interesting etiquette about this. You should never address a teacher as Si Gong unless he is your grand teacher. It’s like calling someone else’s grandfather “gramps”.

I think you get the idea. These “traditional” words have become almost meaningless in the marketplace. The martial virtue of humility has transformed to arrogant titles and claims. In an environment like this a black belt that was at lest rewarded by someone else’s standards at lest claims a bit of objectivity and may well be worth more than all the “professorships” you can plaster on a wall. The best approach is to call the studio, talk, get a feel for the school and the method. In short, before you decided if the teacher is “really” a Grand Master Professor Multi-art Super Double Reverse Red Sash, decide if he or she is even a person.

As for me I’m going back to deciding if I should break down this year and send in my eighty bucks so I can be “voted” a member of the “Black Belt Hall of Fame. Now all I have to do is pick which category I want to be honored in.

One Response to Pirates and Prevaricators, the truth about rank