The Mirror of Movement

Meditation brings to mind the image of a cross-legged monk sitting motionless for hours. Stillness, it would be fair to say, relates to most people’s concept of meditation. Movement we all know from daily life, but stillness seems a bit, well, alien.

Yet ancient peoples saw an invisible thread connecting these ideas; stillness and movement. They may seem opposed to us but like sister and brother they originate in the same family.

This is difficult to grasp at times because modern lives are so frantic. There’s so much to do. Whether or not we really need to send up all that dust, run headless chicken-style here and there, glue ourself to little black boxes until we become mobile phonies; all that’s another question. But each day it’s off to the races. We’re so goal-oriented we’re often actually embarrased by our natural need to be still. We see it as a weakness. So we disguise it: “Take five” – “cigarette break” – “coffee break”  – “going to the bathroom.” We have been convinced that if you don’t like the show you can change the channel, but never turn of that tv set. That’s admitting defeat.

On those occasions when I’ve taught meditation techniques I have noticed how uncomfortable some people become when asked to “slow down.” This is understandable. Part of our personality is invested in our activity. We live in the age of “Do Something – Anything!”

Yet stillness can be a great mirror to movement. A very ancient rule of Chinese Kung Fu states: “In stillness there is movement. In movement there is stillness.” What does this mean? Well… 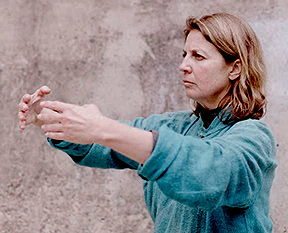 If you try to stay in stillness for any length of time, an eruption of hidden energies will make itself obvious to you. You may find out how difficult true stillness can be. But, if you persist, you might also discover that not every form of movement is GOOD movement. Those errands that attack your mind the second you slow down, maybe not all of them are that important. It’s like those times when our health goes bad: things are put into perspective in double-quick time. But the advantage of what we learn from stillness is that we aren’t sick; in fact we’re something more than well.

I have never known anyone who did not benefit from  the meditation experience. Contrary to the Billy Grahams of the world, I don’t think meditation so much “lets in the devil” and “cleans out” the ego. But before you sign up at Meditation.com you might consider the truth  expressed by that great thinker, Krishnamurti: meditation is not a specific technique, rather more of an attitude. You don’t necessarily have to sit cross-legged, to hum or chant, or hold a lotus in your lap. These are specialized techniques for the serious student. For most of us meditation is just “involved mindfulness” which may manifest when you are simply sipping tea at dawn. It is the condition of being “space out” but prolonged and appropriate. It is like you cat lying there and staring into the heart of things, without judgement.

The nice thing is, whatever comes up when you are in this state of “mindfulness” is yours to keep, examine and learn from. Like a waking dream of a better place, it is the utopia of a daydream. Try it. Tell no one. It’s yor secret.

originally appeared in The Connection, Sept/Oct 2002

One Response to The Mirror of Movement