What Do We Mean By “Martial”?

People get the wrong idea: when they hear “martial arts” they assume tournaments and grudge matches in caged environments. By the same token, they look quizzically at the ninety year old lady who proudly proclaims that she studies a martial art. But true martial arts range through a spectrum of skills and practices. What follows is a description of some of our elusive “martial art” character…

Everyone knows that ‘martial arts’ is about movement, but it is also about Structure; we might even call it structured movement. This translates into the most economical or

efficient way of holding yourself, aligning your bones, synchronizing your efforts,  to accomplish any task. When structure is correct, muscles, organs, bones and tendons all relate; this is why the martial arts are called a ‘whole body art.’ Structure is more than posture; it is focused posture.

In the martial arts, mental focus is known as Intent. Not only does every movement have intent, every movement shows intent.  Like a parent scolding a child: the words automatically carry a deeper message, transmitting to the child the full import of the communication.

It’s been this way for over 2000 years, and the fact that martial artists juggle these particular balls—intent, structure, preservation—is what makes the art  so fascinating. It also places you smack in the middle of a very long Tradition, which millions have practiced, thousands have died to defend, and which has added a continuity spanning generations of teachers and students that will probably continue another 1000 years. It’s this tradition which also adds a face to the word “martial.”

Being part of a tradition can confuse people: they think it binding. In reality, it is a path to uniqueness and freedom. Knowing what has gone before can be a jumping off place for creating what is truly new and worthwhile. After all, when we really want to know how good an actor is, we often have him perform a classic role. The reason? Tradition has set the standard and that allows us to see it surpassed.

Recognizing our uniqueness is an important part both of Self-Preservation and Health. It is more difficult, and even dangerous, defending a self we have never explored. Like a warrior, we have to understand what we are defending. Martial artists also see that an important part of self-preservation is health. We regard disease as an enemy, not a fate, and create strategies to defeat it. We are never passive. 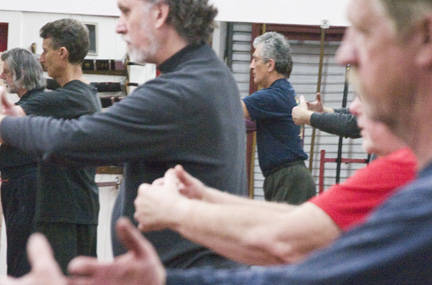 There’s an expression in martial arts: “You’re a black belt, you figure it out.” Sometimes I’m disappointed when teaching a class at how rapidly hands go up for questions. It means no one tried to find the solution for themselves. The martial attitude is to rely on yourself, to think your way through problems, to not immediately ask for the answer. After all, should you ever need it for self-defense, you can’t ask your opponent for help.

Sometimes, people-watching, I detect a martial artist walking up the street. He may look ordinary but he has a certain Presence. To my mind, presence is simply the entirety of all the features mentioned above. That is why it is not dependent on physique, gender or even age. It’s a harmonization of skills and experiences—that is, what we mean when we use the term “martial.”

One Response to What Do We Mean By “Martial”?