Can martial arts be martial arts without a spiritual component? The answer is “probably not.” Those people who only have interest in how effective it is as self-protection or kick-ass, of course, have a right to their opinion. But I think if you examine the minds of most people who study you will find that at least some spiritual interest is always present. It may be camaraderie, your gang, your friends. It may be, if you are very young, that your parents have you attending classes so you can at least begin to pick up the beginning of some disciplined training.

You can mystify the entire question, expounding esoteric practices in sophisticated terms, but it is the simplest spirituality that is also most intriguing. These basic ideas are hard to separate some times because so much about “spiritual practice” and the “warrior spirit” and such have become commodities in the retail space of the psyche. But if we were tempted to catalog aspects of the spiritual that are raised in Kung Fu, I might start the project with some of the following (keeping plenty of white space reserved, of course, for the contributions of our readership and fellow martial artists.)

SHEN (Spirit) In martial arts we talk about Shen, meaning ‘spirit’. It can be the toughened fighter’s spirit we all know about. But it can also be a quieter manifestation like the little hall light, always illuminated, that guides us through dark passages. The martial arts student attempts to exhibit some control over his or her own spirit. In some exercises she will nestle in quiet, or engage in a very close mimicry of the meditative state. In sharp contrast the student may raise her spirit to competition level and bask in the heat of martial determination. The point is that the spirit is there and prompts us 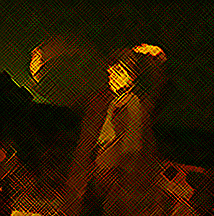 In the equivalent of spiritual pragmatism, the Shen is felt first as experience. There is some initial attempted exercise such as the student trying her best to “lift the spirit.” When the student feels even some slight internal shift she catches that information and weaves it into the next attempt. This pragmatic cycle keeps the Shen in the limelight of interest but never reduces to theory. It starts the student on a lifelong journey combining quests in both the inner and outer worlds, in the world of reality and of non-ordinary reality.

YI (Intent) Part of this process also involves a type of mental focus known as “intent.” This is not just concentrating one’s mind but also heightening the process of absorbing information. Intent is like driving home after work and finding the route peppered with detour signs. You make all the adjustments necessary but your intent of getting home and having dinner never changes in the least. It gives meaning to your actions and gets you home. By the time you have left the car the detour signs are forgotten but the smell of dinner coming from your house is real.

MING (Fate) If there is a warrior spirit that can be learned by ordinary people running the normal obstacle course, it has to do with fate. The martial spirit is not the game spirit, though they may help one another. The real warrior spirit admits the possibility of defeat and even death. But—since this is not the Western version—it recognizes that Fate is not a series of events like a TC movie, but a shape of time like the back of a dragon that can be ridden if we understand its twists and turns, how it lifts us into the clouds and then seems to disappear stealing our support with it.

COMMUNITY Unlike some, it’s never bothered me that monks engaged in martial studies. Some see this as paradoxical. But the basic idea is that people seeking a similar spiritual experience need the company of like-minded others. As Thomas Merton pointed out, most of the monks in the world are doing just about the same thing. There is a brotherhood there, a concurrence of goals. Martial friendships often last for decades. Where some groups share a quest for money or fame the martial community aims at something humbler. Probably the most important FACT is that so many people FEEL what they can only call the spiritual benefits of the martial arts. A very dear friend of mine was an art teacher and an artist for his entire adult life. He knew a lot of famous painters and other artists. When they would get together he would never ask if things were going well or poorly, or about the details on the latest shows, or who was popular and who fading. He would simply ask, “Are you working?” meaning, in the studio. That’s the sum of it with ritual, dogma and claptrap removed.

Reprinted with permission from Plum Publications

One Response to Spirit Training