Making the Martial Arts Whole Again: A Half and Half Seminar 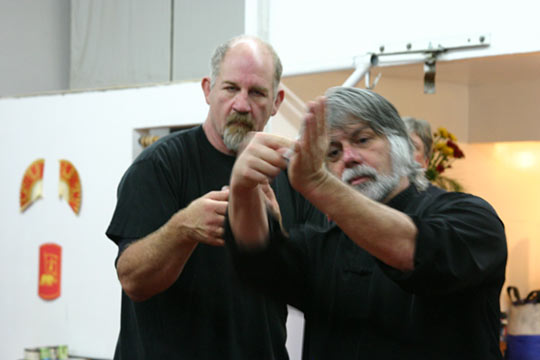 It’s true: martial artists lose all the time, at least when it comes to battling social trends. One year
the Ninja is the favorite Halloween costume and the trees are full of wannabes like dark fruit pretending to be invisible. Then kick-boxing or mixed martial arts pops up and everything is about kick ass. Then Qigong goes from obscurity to ubiquity in the space of a week, and spas suddenly fill up with people sculpting the air.

The rare event is martial arts represented as something OTHER than a kind of one-dimensional activity. Like Yoga, the martial arts have become a “must do”—but not a “delve deeper”—proposition.

Partly this is just a problem in education. Most people recognize the choreographed

traditional martial sequences diversely called forms or sets or kata. Westerners particularly have trouble with the fixation that if you are moving but not scoring or hitting someone you must be dancing. They just cannot wrap their minds around the practical nature of forms, any more than they can see that real fighting techniques, with just a bit of stylization, are actually the building blocks of most forms.

The Academy of Martial and Internal Arts is sponsoring an evening exploring this fascinating intersection between formal and practical. Led by two experts, this “Half and Half” seminar will present a classical Kung Fu form, from the Praying Mantis school, then proceed to analyze that form for its practical movements applicable by any martial artist, despite his or her rank.

Ted Mancuso, the Director of the Academy, teams up with self defense expert John Ottenberg. John’s expertise and decades of fighting experience have allowed him to develop a system of natural movement applied to life-threatening situations. Though intuitive and comfortable, the actions of his style are not the dumbed-down self-defense sometimes taught, nor the competitive, rule-based sparring of tournament competition.

Oddly enough, the most practical movements closely match the actions found in traditional forms. This sheds new light on both activities and takes a big step in bringing the martial and the artistry back together. Come and participate. You don’t have to be a high rank; even a minimal exposure to the martial arts will allow you to enjoy this unusual mixture of tradition and reality. Even if you have never studied this style, the method will help you to reach a higher level of interpretation for the forms of your own style. Come and see the art in the fight and the fight in the art.

Want to see video of our first Half and Half seminar?

$25.00 Pre-registration required. Just click below to whichever date works for you and you will be taken to our shopping cart to complete your pre-registration.
January 7, 2014 Class

This entry was posted in Events. Bookmark the permalink.

2 Responses to Making the Martial Arts Whole Again: A Half and Half Seminar