Tai Chi, A Marriage of Yin and Yang

People know Tai Chi as a slow, gentle and graceful dance. It’s only natural to assume that its famous health benefits arise from its meditative nature. But history tells another story.

It is a story of a marriage made by mutual convenience. And it is a story of a union of parties as different from one another as the Capulets and the Montagues. It’s actually more than a marriage story; it’s a blending of two clans in a union that took centuries to consummate.

One the one hand you had the Martial Arts practiced in China for more than 5000 years. The training was fierce, the standards super-human, the intent: destruction of the enemy. Truly martial, much of the practice was bitterly difficult and focused single-mindedly on weapons and warfare.

We witness the arrival of the second clan, Qigong, a legion of people practicing slow movement, animalistic postures and constant attention to respiration.

As a general rule these were not inherently friendly clans. They were so different. Martial arts might be drilled in a military environment, Qigong and such practices often sat in the shadows of temples and monasteries.

Martial training was rigorous enough to be life-threatening. Besides the bruises, sprains, breaks and pains there were many deaths. It became obvious that this Yang type training needed a Yin complement. Qigong looked the answer. A simple system emerged: hard martial practice to strengthen and condition, offset by a session of Qigong, to relax, recuperate and rejuvenate.

As the Masters refined their arts, they desired to bring martial arts and Qigong closer together, so they developed a practice where you would stand still (Qigong,) then suddenly move with blinding speed (martial arts,) only to resume your stationery posture as still as a mountain. The appropriate name for this internal art was ‘Form of the Mind Boxing.‘ This method of alternating states was a break-through in martial history. 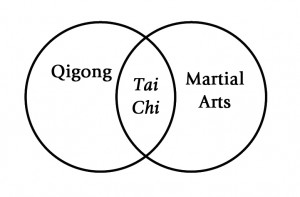 Finally, clan boundaries disappeared. Somewhere around four centuries ago, a key martial union gave birth to a brilliant concept. This required an examination of all basic martial movements, throwing out such extreme actions as aerial kicks, rolling attacks, and overly-tensed strikes. What remained—actually a great deal—were movements which could be practiced as martial and Qigong, simultaneously. The consummation of this was Tai Chi (actually the full name is Tai Chi boxing or Yin/Yang Boxing.) If you imagine two circles, Martial Arts and Qigong, overlapping, then Tai Chi might be said to occupy the mutual area. This drawing would also imply that Tai Chi brought in some concepts purely qigong. This is true. There are other similar styles, but Tai Chi is the “first family” of this approach.

Over the centuries the man and wife have grown to resemble each other more with the martial emphasizing not fighting but its intentional integrity and heroic physics. Qigong has gained a sense of structure and purpose, a great aid to its practice.

And that is the reason the Chinese consider Tai Chi to be a “cultural treasure” of a high order and a study in balance and harmony.