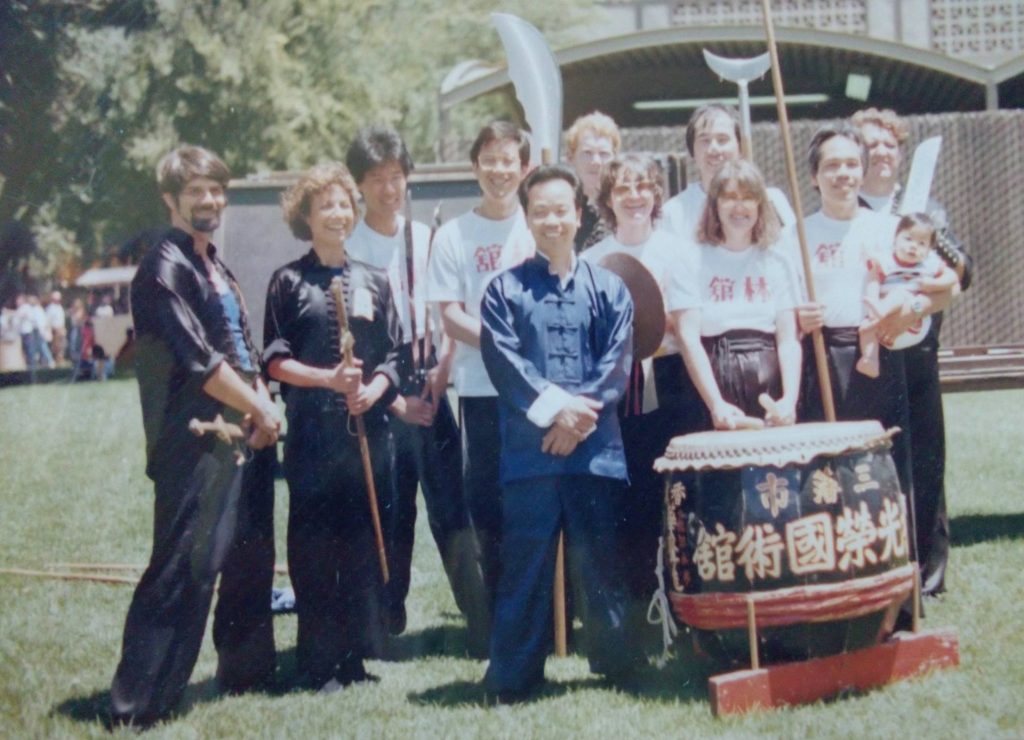 L-R Sifu Ted Mancuso, Sifu Linda Darrigo and Gene Ching with Sifu Lam. Photo is from a Kung Fu demonstration they did in the mid 80s.

Master Ted Mancuso, the proprietor of Plum Publications and founder of the Academy of Martial and Internal Arts, is my elder Kung Fu brother, or my Sihing (師兄) in Cantonese. We both trained in Northern Shaolin Kung Fu (Bak Sil Lum 北少林) under Grandmaster Kwong Wing Lam and our friendship spans nearly four decades now.  Master Ted graciously allows me train alongside his students, my martial nieces and nephews, or my Sijat (again in Cantonese 師侄 – it’s not the same in Mandarin), and I’m very grateful to be part of his Academy. Thanks to Ted’s foresight, the Academy closed just ahead of California’s Shelter-in-Place order, so it’s been several weeks since we’ve held class. The Academy sits across the street from Dominican Hospital; During our last sessions in April, we could see them setting up emergency tents in preparation for the inevitable crisis. So we knew this was coming. We just didn’t fully understand the impact yet. And we still don’t. 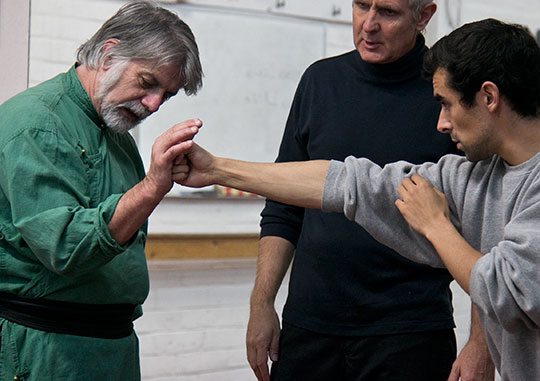 What I do know is that the order has had a tremendous impact on my practice as I’m sure it has for everyone. Staying healthy and being out of work is a more pressing concern, but I really miss class. Ideally, isolation should not inhibit Kung Fu, especially not for Shaolin proponents because our roots lie in renunciates. The lone monk studying snakes, cranes and mantids to penetrate mystic martial secrets while living a solitary life high atop a sacred mountain is a romantic image we all share.  While I’m no monk, I do have a daily regimen that I practice in solitude like any serious martial artist.  And now that I have more time, I’ve expanded that to fill the gap. Unfortunately, I’m not on a mountaintop.  I’m sheltering at home where I don’t have a yard that works for working out, but I’ve rearranged the furniture in my living room to make more space.  At Shaolin Temple, it is said that Shaolin can be practiced in the space it takes to lay down an ox. I was raised in the suburbs, so I have no idea how much space that is.  Nevertheless, the forms I learned at Shaolin Temple fit, along with some others, just not many Bak Sil Lum forms.  Bak Sil Lum left the temple centuries ago and has expanded into its own unique system that takes up more floor space. Be that as it may, this solo training at home just isn’t the same as class at the Academy.

Sheltering in Place has me reflecting upon what I miss most not being able to train at a school. I miss Ted’s teachings. He’s always pulling me aside saying that his lessons are too basic for me, but it’s really all about the basics. Basics always bears reminding and repeating (and a lot of Ted’s basics are rather advanced actually). And truth be told, at my age, well, basics are just about all I have left. Beyond the structured classes, we share a lot of wisdom at the Academy, not just through formal teachings but also between the student body interactions. Many of his students study traditional Chinese medicine so during our breaks, there was plenty of discussion of the coronavirus crisis leading up to the sheltering order.  I also miss the partner drills that keep me honest and I miss the fun of sparring.  These practices are in total defiance of social distancing protocols and must be put on hold for now.  I feel for those martial arts styles like Jiu-jitsu that are heavily reliant on partner work because this crisis must affect their practice much more severely.  But we all must 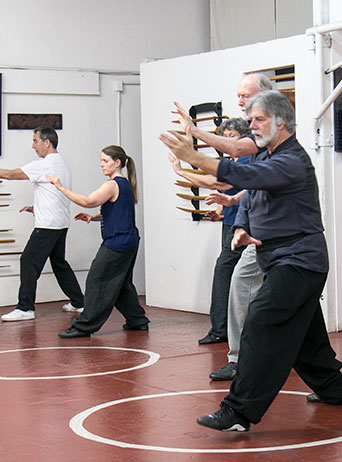 pull together and stay apart to stifle the viral spread.

Aside from all of that and the camaraderie of the Academy, what I miss most of all is group forms practice. Group form recital is a unique method of training of forms-based martial arts.  It has roots within military training, particularly with infantry and pole arm weapons.  Medieval militias have drilled coordinated attack formations for centuries.  Today, mass demonstrations of synchronized forms make for impressive performances, adding spectacle and grandeur to New Year’s celebrations, major sporting events and other cultural gatherings.  The International Festivals at Shaolin Temple stage group form demonstrations on a truly epic scale with thousands of performers all reciting the same form in perfect synch.  I’ve witnessed a few festivals and they are so powerful and inspiring to see firsthand.  I’ve also helped stage mass Tai Chi group forms with a few hundred participants for KUNG FU TAI CHI DAY.  We’ve held these in San Jose for several years in a row now.  Those are a lot of fun but sadly, we had to postpone it this year due to coronavirus.  In modern Wushu tournaments, group forms are a competitive event called Jiti (literally ‘assemble group or class’ 集體 – this is in Mandarin because the language of modern Wushu is Mandarin; in Cantonese this would be Jaaptai). 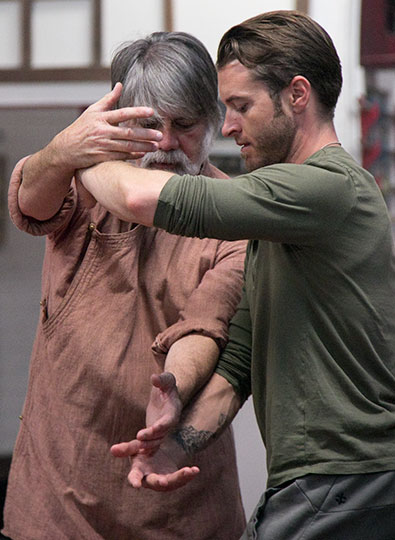 Group form practice is less formal at the Academy.  We’re not looking to compete, or even to perform at demonstrations, plus it’s a small and intimate group.  Nevertheless, it’s a cooperative training method where anyone who knows the forms can participate, no matter what level.  I’ve been practicing some Bak Sil Lum forms for four decades now.  Many of Ted’s students have just learned them, but that doesn’t stop us from reciting them together. Quite the opposite. Forms are like venerated songs that have been passed down for generations.  First you learn your basics – your notes and chords. Then you learn the verses and choruses, eventually assembling them into a song.  But then there’s the rhythm and melody, and that’s where the real art of it lies.  It’s the contrasting elements – the distinction between hard and soft, fast and slow, fluidity and crispness – that give the form or song soul.  Without contrasting emphasis, it’s mechanical, like playing to a metronome.  Metronomes are training devices to be discarded once the piece is well learned.  And group forms practice is like being in a chorus where every voice contributes something.

By practicing in synch with me, their Kung Fu uncle (Sibaak in Cantonese 師伯 – figured I’d slip just one more familial term lesson here while I’m at it), my Sijat can glean my tempo and approach to the forms. Hopefully, that will be a steppingstone for them to find their own way, because just like songs, there’s a lot of margin for personal interpretation.  When studying forms, every practitioner must play to their own strengths and weaknesses, molding their body to fit the forms and adapting the forms to fit their body.  There’s room for personal expression so unless the my Sijat has my exact same body type (and none of them do) there should be some variation. 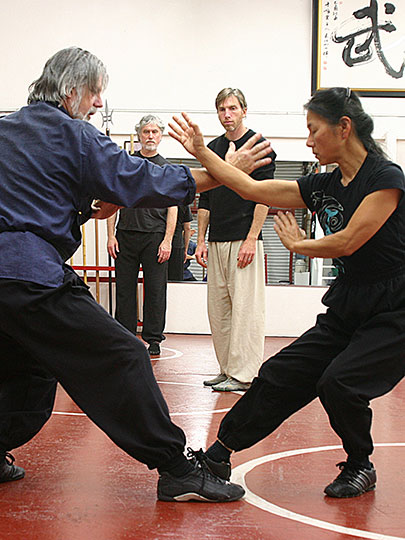 However, to remain true to the style, the essence of any given form must be retained.  Sometimes it might evolve to an entirely new style, which is a natural process given the progression of generations.  Bak Sil Lum descends from Shaolin Temple and many principles remain.  However the forms of Bak Sil Lum are different than the forms practiced at Shaolin, which is why it is its own distinct style.  There are differences between how Master Ted and I approach the Bak Sil Lum forms, even though we learned it from the same teacher, although on the whole, we’re often struck by how similar our takes are overall.  We all strive to get at the essence of it and some things are universal.

Practicing group forms alongside my Sijat benefits me too.  Anyone who completes a system like Bak Sil Lum has a moral obligation to pass it down out of basic filial piety. A complete Kung Fu system is a cultural treasure, and when you’ve learned all the forms, the sophistication and complexity become profoundly apparent.  It compels you to keep it going, otherwise you have this jewel of wisdom that no one else can understand.  Even though I only remember a fraction of Bak Sil Lum now, I have more time on task, and can offer some guidance on what not to do at the very least. 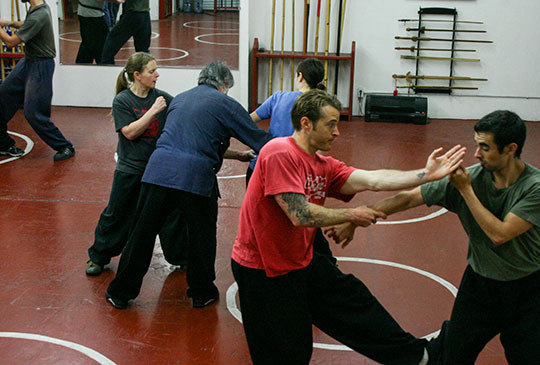 On a less lofty level, most of my Sijat are younger than me by a decade or two. Keeping up with their physicality is very motivating.  While they might not have all their moves down, they have better stamina and more exuberance, and that’s contagious while working out with a class.  They become my pace cars in a race that never ends.

Thou shalt not be afraid for the terror by night; nor for the arrow that flieth by day; Nor for the pestilence that walketh in darkness; nor for the destruction that wasteth at noonday. Psalms 91:5-6

We could still practice group forms while maintaining proper social distancing. One of my old Sihing used to say practicing group forms was like ‘flying in the Blue Angels, wingtip to wingtip.’ But even that’s more than six feet away. However, given the severity of the situation, that wouldn’t be prudent.  For now, it’s best to abide by the rules until the shelter order is lifted. 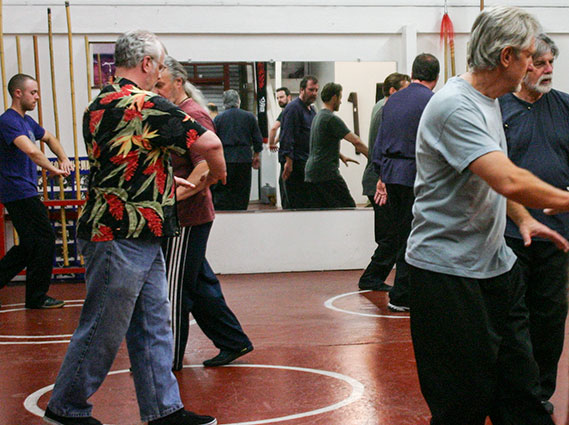 Make no mistake. We are past the point of things going back to ‘normal’.  We are witnessing a moment in history – a global shift – to a new normal. Super-viruses have been predicted for decades and now it’s something we must factor into our everyday lives. We’ve had multiple warning shots: Avian Flu, Swine Flu, Ebola. I was in China for SARS so for me, it’s been clearly imminent for years.  Given the forewarning, there’s no one to blame for our lack of readiness but ourselves.  Even when the Coronavirus subsides, another super-virus is likely in our future. I don’t say this to monger fear. I just wish that when this subsides, we are more prepared next time. We can’t go back, but we can go forward.

Regardless, I am looking forward to when I can practice some Bak Sil Lum forms with my Sijat at the Academy of Martial and Internal Arts again. I truly hope that’s sooner than later.

Be well. Stay strong and healthy.

Gene Ching is a student at the Academy of Martial and Internal Arts in Santa Cruz. He is also the publisher of Kung Fu Tai Chi and KungFuMagazine.com.  Due to the Coronavirus crisis closing his publications as non-essential, he is contributing to KaiMen.