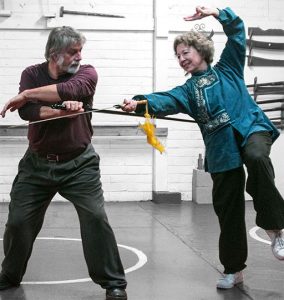 This is an article about one of the great weapons, a weapon that has been employed in real combat but which is also considered an instrument of beauty and style. People react variously to a two-edged straight sword; some see its performance as art. This is rare. Traditionally, scholars wore a straight sword to blend the literary with the martial. It is said, that Confucius wore a sword for just this reason. It is not typically a battlefield weapon, but those who protected their villages commonly wielded the two-edged blade with authority. Today, most who pick up this weapon say they are “playing the straight sword,” and, despite their concentrated practice, its simply for the pleasure of moving it. And there is more I want to say about the straight sword, but I’ll put that off until later.

There’s a certain level of elevated skill that comes with each weapon. Here’s a comparison of the straight sword to its fellows: Staff 100 days; Saber 1000 days; Sword 10 000 days. 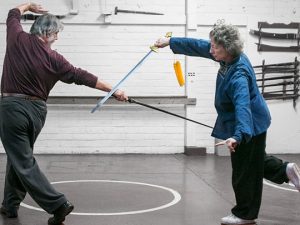 10 000 days? Actually, 30 years is just about the correct amount! Were you going somewhere?

A friend of mine spent time studying at Juilliard Academy of Music. When I asked how long it took to master the flute—his instrument of choice—he thought about it then guessed 15 years as being ballpark. Expertise costs time!

There is, indeed, much to learn from a straight sword; alongside its key elements there also exist a few dodgy moves to avoid—remember, you are working with a sword that has TWO edges. While the saber is a hammer, the straight sword is a pen—Mont Blanc at that. 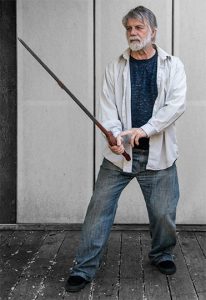 The FIRST precaution: never, I mean never, as in NEV-ER, wrap the straight sword around your head. Traditionally, this is known as “cutting the braid to Heaven;” rationally, we say it is just plain stupid. Make sense?

What does the straight sword want to teach us? What energies are inherent in its movements? What is an “energy?” And just what’s going on in the first place? All weapons have qualities such as fast, light, graceful, twisting, and more. The trick of understanding the straight sword is to first realize what it cannot do: block your opponent’s weapon; the sword is simply too light (there are exceptions like the “War Sword” which have greater heft). But what it can do it does with great alacrity: it intercepts and repels other weapons; it cuts with a backward (yin) stroke, and it is a stunning example of chan si jin, or “reeling silk energy.” 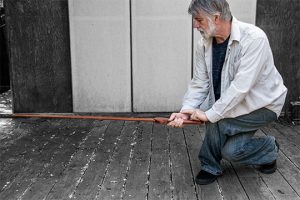 And as you advance, you broaden your appreciation of the sword. Then, on some certain day, you suddenly realize that the moves themselves are just preparations for a larger stage—they are the guides to intent.

You learn its applications and find that the weapon is practical after all; many of the moves work beautifully, although repetitions are needed before you can understand its efficiency.

Let me take the place of the sword, for a minute, and be your teacher. Place yourself in the following movie scene. 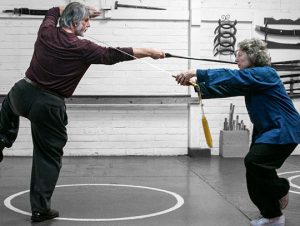 Conan, using his saber, attacks with a downward chop that would vivisect an elephant. You glide to the side, evading his blow. At this moment, you reach out with the first few inches of sword, intercepting his wrist, ignoring his body. Immediately, your footwork crosses his path and you drag your sword across his entire body. 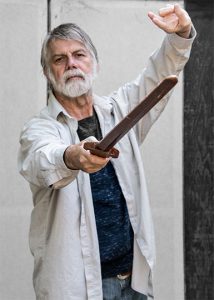 Footwork matches handwork—the feet must position you to the right place, angle and timing. The sword is always willing to adapt, and does so beautifully.

Let’s say you are pretty advanced and can understand the technique of the sword. It is easy to to observe that the straight sword beats the Cimmerian to the draw every time. It is said that the sword only uses the tip’s three inches to fight. This is as close as you want to get to your saber-swinging opponent.

What may not be as evident—but is the true treasure of Kung Fu weapons practice—is that the technique described above with the sword is exactly the same as the one you would use for a front hand straight punch: evade, intercept, respond. With enough practice, the tip of the sword, the toe of your stepping foot, and the placement of your other hand come together to form a triangle constantly adjusted to the moment. 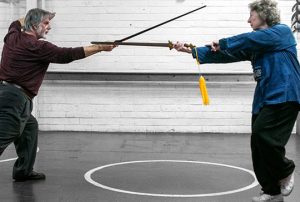 This layered approach—sometimes very clear, sometimes a little more nuanced— shows a method of training person-to-person that has stood for centuries.

This is elegance with a purpose!

This entry was posted in Articles, Kung Fu, Training. Bookmark the permalink.