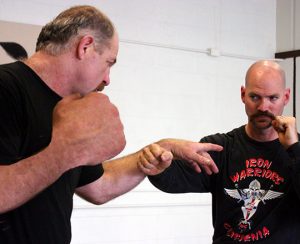 This guy has a huge jaw! A damned big jaw. By far, the largest jaw I’ve ever seen.

At least, that’s what twirling around my brain as I face my sparring partner. Of course, the truth is that his jaw—in real life—is just average size; but in my imagination, his jaw has an appetite of its own.

There’s a well-known phenom that comes into play when conflict exists, whether you are sparring with an individual partner or dealing with a global virus. Some people call this “telescopic vision,” which is a pretty accurate description of the actual conflict between one’s eyesight and the “vision” or impression one thinks one sees.

Martial artists deal with “telescopic vision” in a unique way, and not just as a special skill. It can be truly frightening to see your 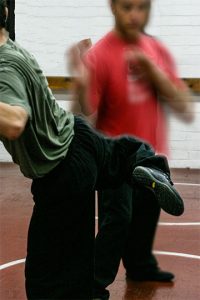 opponent—or significant parts of him—enlarge while just standing there. But one can learn, with some practice, how to shift this vision from scary picture back to a reasonable, approachable image. Martial experts have developed stratagems over the centuries, battling not just their opponents but also their own vulnerabilities. Here are a few strategies, to encourage the ballooning picture to shrink a little.

~Don’t stare at the abyss. Look to one side of your opponent, robbing his form of individuality so you don’t end up jerking with fright every time he moves. Don’t allow your eyes to personalize the other fighter—dehumanize him when possible. It is not personal! He willingly got into the ring, I got into the ring, everything is just fine. All part of the game.

~Judge the distance by making a false movement or two, then watch to see at what distance he jumps. Whatever you might think, an affective movement must—in most cases—manipulate the distance to the opponent. Remember, the illusion of distance associated with telegraphic movements is part of what your opponent/partner is using to confuse, even if it’s just an illusion. Two can play at that game and, as I have observed countless times, this interchange can redirect the direction of the force. 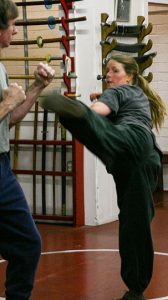 ~Try to see the situation from your opponent’s side of the table; in this case, then, the technique reverses (sound like the rules for a kid’s game, doesn’t it?) and can be summarized in two words: “Don’t flinch.” I’m not saying this in an effort to be a tough guy or cast you as such, but to elementally fight fire with fire, timing with timing, and then, and then…

It’s easy to make the grand claim, that our opponent just represents Life itself, and too exaggerated a focus will always defeat us. It feels realistic to see our current situation as a fight between us and a legitimate sparring opponent. Martial arts teaches us—with a little effort and the aid of a partner or a mirror or even a punching bag—that you can simply train yourself to reduce those magnifications down to size, not to minimize their dangers, but to keep them in perspective. In times like these, you want your imagination on your side, strengthening your line of defense.

This entry was posted in Articles, Kung Fu, Principles, Training. Bookmark the permalink.

One Response to Telescoping