Sanshou: Partner Practice in the Age of Quarantine 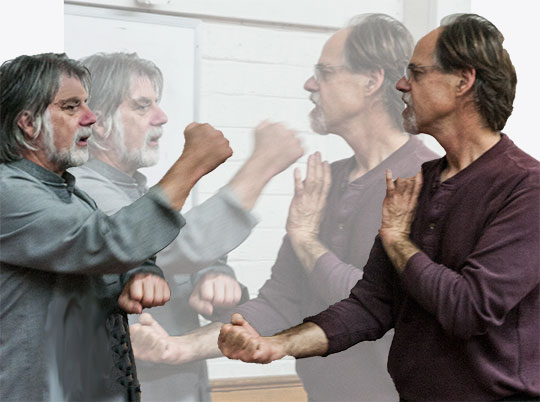 Why is partner practice so different from solo practice? In my daily Taijiquan practice in a time of sheltering-in-place, the answer of course is quite obvious. As a martial artist, I find I am missing the feedback I feel, the energy from a partner’s response, and our discussion as we explore via push hands, partner forms, and apply specific applications taken from our Yang and Chen Taijiquan sets. But on the other hand, practicing by myself for many years, I have learned to use my imagination as I focus my Yi, my intent, on how my spiraling energy wraps around an imaginary arm, leg, or body, and how I am potentially responding to an opponent’s approach.

Have I been practicing by myself in my backyard? Yes. And as such, my imagination runs wild! But I must confess, twice a week during this time of sheltering at home I have been meeting with a friend to connect, practice, and learn from each other. I have to say that being outside, physically distancing while practicing different forms and weapon sets has been safe and beneficial. I still can watch and learn, ask questions, and discuss a move’s application and meaning. But honestly, partner practice has intrigued me the most when we meet.

I am calling it physically distant partner practice (PDPP?). Specifically, we have challenged ourselves to relearn an interactive form we learned years ago: Sanshou. This is a two-person set that relies on the interaction between two people in contact with each other. There are many, many Sanshou sets. In all of them, through an exchange of attacks and blending responses, one intercepts and melds with a wide variety of attacks, and then returns an appropriate response that flows naturally. It is a stylistic, dynamic, honest set of stimuli and responses between two people. One learns to feel small changes that become large, responding by touch and movement to turn an opponent’s attack into one’s own attack.

Now how does one relearn and then refine a two-person set without being able to be within 8 feet of each other? It isn’t that hard to relearn it: as the one who remembers it (mostly), we could move in parallel, just like we originally learned it, rehearsing as we would any form. We filled in each other’s gaps of memory. But putting the two sides into practice against each other became more problematic. 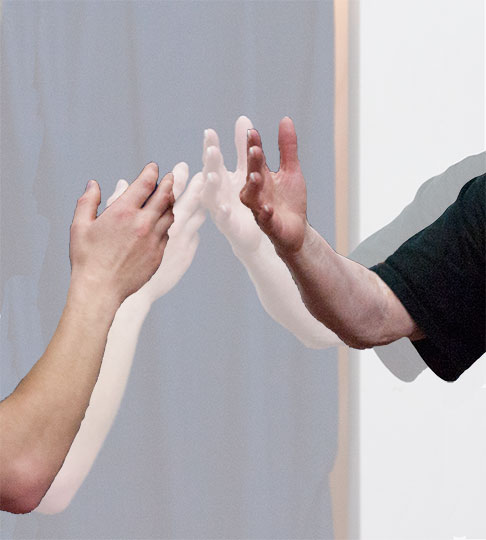 We start a good twelve feet apart, facing each other. I found that simply mimicking the progression through the moves became entangled with my thinking: What does this mean? When is the right timing? To what am I responding? Suddenly, two brains remembering the set in a rote way while applying it visually (and not by feel) became a bit of a problem. I found that while I could see an attack coming (eight feet away!) and could respond to it, it was completely different from feeling the actual, physical energy coming my way. And since my partner was relearning this set from a more distant memory, she often became confused as to what came next with the most sensible response.

So we talked about it. We would stop and discuss as we rehearsed a particular cycle of attack and response. And, we found we could hold a dialog as we moved through the set. “I am shoulder stroking you, so you shift back, wipe underneath your arm to catch my elbow, and using the resulting spiraling energy, launch a hook punch. No, no, with the other arm!”

Now, we have introduced a whole new way to give and receive intimate feedback: from the physical to visual and verbal. Now this is quite a different way to learn to receive and send energy. I found pretty quickly that I would see my partner’s attack and I could immediately respond into the next part of our interaction. But it was easy to stutter, for our verbal and visual easily became mixed up with simply moving. Smooth we were not! But, we were learning. 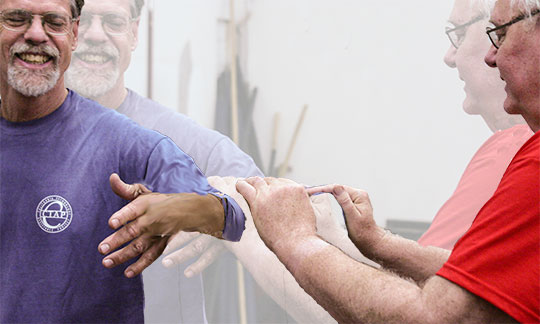 We have gotten to a new level where we can move pretty smoothly through the form, still 8 feet away, talking as we react and attack. But I have been thinking a lot about the differences in responding to physically feeling energy entering my space versus sight and sound being my only stimulus. Earlier I used the term “stutter” to describe how I felt. Perhaps a better word is “freeze.” I think that in my practice, I have learned that to feel and respond is much more effective for me compared to seeing, analyzing, and responding. There is a flow, a lack of some particular thinking that I often see getting in the way of students. When one thinks about what is coming next, there is a thinking paralysis that stops interaction. In that one to five seconds, the energy between two people is broken. In a martial situation, the thinker will go down. And responding energetically, the special flow of Chi between two people has been broken.

The Tai Chi Classics include Yang Chen-Fu’s Ten Essential Points, noting that in ones practice, there should be no interruptions. We should use mind rather than muscle and distinguish full from empty. I find when one thinks too much, the thinking mind disconnects from the feeling mind/body, and that interruption disrupts my awareness about what is full and what is empty, what is substantial and what is insubstantial. Suddenly, I do not know the best way to respond. At these times, I need to shake off my thinking and just react. I should think afterwards when my response is wrong and I get hit!

Now my dilemma is how do I capture this response when using my mind to interpret a visual/verbal-only attack. This is my new shelter-in-place problem. Can I apply my imagination I use during my personal practice, feeling how I am responding to an attack with a particular move that is in a prescribed set, to another actual person in a two-person set who I cannot touch? This is new for me, and I think there is something here I can learn.

Karl Forest is an advanced student and longtime teacher at The Academy.

One Response to Sanshou: Partner Practice in the Age of Quarantine