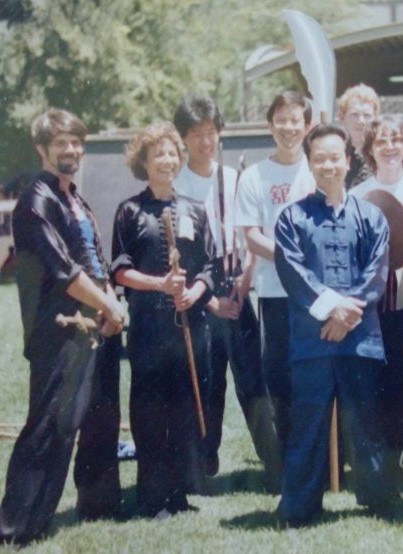 Sifu Ted, Sifu Linda, me and Sifu Lam, along with fellow students, Phil, John and Jerome after we did a Kung Fu demo at the County Fair in the mid-80s.

The title “Sifu” is a fine example of simple answers versus deep dives. On the simplest level, it’s the Chinese term for ‘master.’ It gets complex when you go deeper. “Sifu” is the Cantonese pronunciation, which sounds kind of like “sea-fu.” Master Ted Mancuso’s lineage has both Cantonese and Mandarin influences. Among his masters are Grandmaster Adam Hsu from Taiwan where they speak Mandarin and Grandmaster Kwong Wing Lam from Hong Kong where Cantonese is spoken. In Mandarin, it’s “Shifu,” which sounds a bit like “sure-fu.” Although Cantonese and Mandarin use the same written characters, there are regional dialect distinctions and vast idiomatic differences, so the comparison isn’t always an X=X relationship. This gets even more complicated, deserving of an essay of its own, so we won’t dwell on it too much here. At the Academy, we generally default to the Cantonese, most likely because that set the precedent in the 70s and 80s when Kung Fu was beginning to cross the Pacific.

For now, I’m going to default to Mandarin because I’m more conversant in the Mandarin system of romanization of Pinyin than I am with the Yale Cantonese romanization. Although I was raised with the Cantonese under Sifu Lam, I spent most of my time in China at Shaolin Temple where they speak Mandarin (with a Dengfeng accent) while I only spent a few days with Sifu Lam in Hong Kong back in 1991. I’ll come back to Canto later.

The Chinese martial arts have a familial hierarchy because we are mostly clan based. When you hear Tai Chi divided into Yang, Chen, Sun, and so on, those are surnames. They’re clans. This is different than the Japanese and Korean martial arts which are more militaristic. It’s one reason why they have ranking belts. The Chinese ‘rank’ is not about how many examinations you’ve passed. It’s based on when you joined the clan and entered the family. All the terms used in the Chinese martial arts are relative, as in your relatives, your brothers, your sisters, fathers and mothers, and so on. Seniority is not a measure of skill. It’s about when you started training under the Shifu and joined the clan. Confucianism demands that we respect our elders. 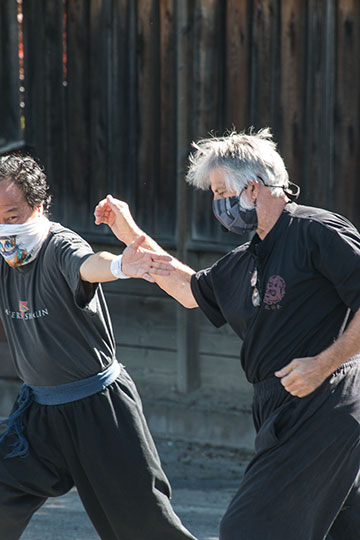 Shifu is comprised of two characters. Shi (師) most commonly means “teacher,” but it can also mean “master” or “specialist.” There are two different characters used for fu in Shifu and they are phonetically identical: 傅 and 父. Fu #1 (傅) literally means “teacher” so it’s a little redundant to Shi. What’s more, this doesn’t specifically connotate “master.” In mainland China, this term is not familial, so it can be used as a respectful term for any specialist, like a taxicab driver or a service repairman. It’s a polite term but not one that you would write down, just something you would say, which is a tad confusing since it sounds just like the other Fu.

Fu #2 (父) means father. So fuqin (父親) means father and muqin (母親) means mother and fumu (父母) means parents. This is more intimate implying lineage. The wife of a Shifu is called Shimu (師母). That’s the same mu as in muqin and fumu (if you look at the character, you can see two breasts, which is as motherly as it gets). However, a female Shifu is still addressed as Shifu, not Shimu. Her husband is also addressed as Sifu. I think that’s a Confucian thing. Most of the terms in Chinese martial arts are masculine. I’ve heard that in Northern China, sometimes the term Shiniang (師娘) is used instead of Shimu. Niang is another word for “mother.” I’ve never been able to confirm this, but I bring it up just to demonstrate that there’s some wiggle room across different lineages with these terms.

Some schools are very rigid about using the hierarchical terms, but this just isn’t the Santa Cruz way. At the Academy of Martial and Internal Arts, we’re respectful, yet informal. We’re all on a first name basis. Nevertheless, it’s important to know the familial terms as part of the cultural enrichment that comes with training at the Academy.

Below are some of the commonly used terms in Chinese martial arts.

*Siye is seldom heard in Cantonese. It’s used in Mandarin.

**Sigu/Shigu is very rarely used. I’ve never heard it. I’ve only found it in academic tables such as this one.

****Daiji is seldom heard in Cantonese. They usually use Toudai.

The relativity of these terms can be confusing at first, but here’s an example of how it works at our school. Sometimes, I’ll call Ted “Sihing” and Master Linda Darrigo “Sije”. This is because we all trained together under our Sifu Kwong Wing Lam and they are my elders. Lam was from Hong Kong, so I’m going to shift back to using the Cantonese terms for the rest of this essay. Both Ted and Linda could reciprocate by referring to me as “Sidai.” However, this is only how we might address each other when speaking directly with one another. When speaking to the class at large, we would formally refer to one another as “Sifu.”

Formally, Grandmaster Lam is the “Sigung” for the Northern Shaolin students at the Academy. Ted, Linda, and I called him “Sifu,” but our students would address him as “Sigung.” Strictly speaking, Adam Hsu would be the “Shigong.” This also makes me the “Sisuk” at the Academy and I could call all of the students “Sijat” if I were so inclined. However, that’s a rare term in my experience. None of my Sibaak, Sisuk, or Sigu ever called me that. I had to ask around to figure out what that term was exactly. My Mandarin Shaolin masters didn’t use it either, at least not when I was listening. For those students at the Academy who are not studying Northern Shaolin, they would still formally address me as “Sijat” even though I never studied with Sifu Hsu or any other of Sifu Ted’s masters. This goes back to that Confucian influence – always default to what offers the most respect.

One of qualities I admire about our Academy is that it is respectful without being ostentatious. We don’t need these formal terms to establish any pecking order or anything like that. We’re all practicing and striving together to help each other improve, so I am not presenting this so that everyone starts calling me Sisuk in class. That would be a little annoying for me. Personally, I’m not that big on titles. 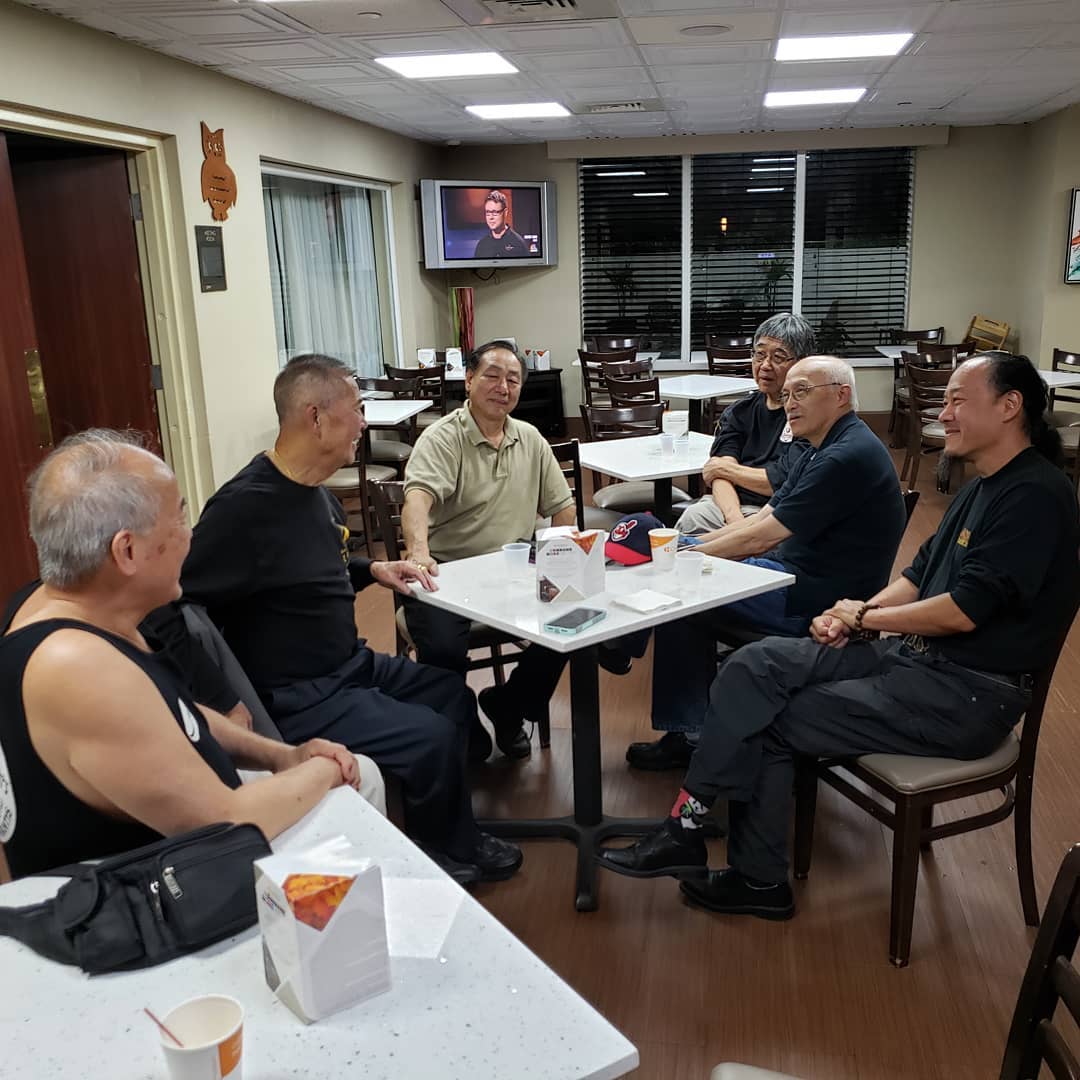 L-R: Grandmasters and Masters: Norman Chin, David Chin, Hoy Lee, Johnny Lee, Buddy Wu and me at the 50th Anniversary Celebration of Lee Koon Hung Kung Fu in Florida in 2019. When these gentlemen started calling me Sifu, I couldn’t deny it. Photo by William Britt.

It took me a long time to accept being called “Sifu” for many reasons. First off, Lam Sifu never called me that. He wasn’t into certifying new masters. I was the one who pushed him towards granting instructor certificates. I even designed his first instructor’s certificates back in the late 80s. My Shaolin master, Shi Decheng, hasn’t dubbed me as a “Shifu” either. I never passed any test, never snatched that pebble from my master’s hand. However, a few of the other masters that I’ve trained under aside from Lam and Decheng started called me “Sifu” because I was helping to coach at their schools. And more significantly, most masters and grandmasters call me “Sifu” now in the martial community at large. It’s an honor to sit at tables with them and be accepted into that circle. After that, I can no longer deny the label.

My other trepidation was that I’ve gotten to know so many masters through my career as a martial arts publisher and writer and I’ve seen so many levels of skill, much of which I couldn’t come near matching. I’ve also seen so many paper tigers, people so desirous of title that they took it upon themselves before they achieved any level of real mastery. I’ll be the first to tell you that I have yet to master any of this stuff. And yet, my martial experience has been unique. My twenty years in service as Kung Fu Tai Chi publisher counts towards something so I’m fine with the Sifu title now, even though you’ll never catch me putting it on my business card or using it as my TikTok moniker.

So in class, there’s no need for formality. Don’t feel that you need to call me “Sifu” or “Sisuk” unless you’re practicing your Cantonese or asking some formal question. Just call me “Gene.” I’m sharing this with the Academy because some of you might venture forth into the martial world someday and will need to know these terms. Additionally, as some of you are exploring other aspects of Chinese culture, these familial terms exist within other disciplines. If you study Chinese calligraphy, or even Traditional Chinese Medicine, you may encounter terms parallel to these there too.

For me personally, beyond the designation of being ordained as a Sifu by your Sifu and having other Sifu call you Sifu, I believe you earn the title when you start acting like a father. A father thinks of his family first and foremost. He (and I’m using the masculine in a general sense – I don’t mean to be exclusive to female Sifu but as we’ve seen, that’s the way the language goes) provides and protects his family. He nurtures his children, guiding them towards adulthood when they can carry on the family name on their 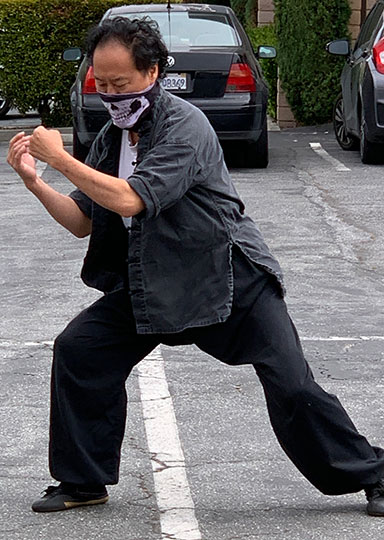 own. There is a turning point when an individual stops living for themselves and starts living for his progeny – for the perpetuation of his clan.

For some of us, becoming a Sifu is a calling. To fully respect tradition, you must pass it down. It’s the very act of passing it down that makes it traditional. And an important aspect of our tradition is respect. Confucianism speaks of the five relationships: ruler and subject, father and son, elder brother and younger brother, husband and wife, friend and friend. This concept is reflected in Chinese martial arts relationships and when everything is good, it underpins the mutual respect within the clan. Respect your teachers, your seniors and especially your juniors, because the future lies with them.

Practice for the next generation.

3 Responses to Becoming A Sifu