A little about our classes…

Beginner Level: Learn the ORIGINAL Shaolin. How do we know we are teaching you authentic Shaolin Kung Fu? Because we went to the Shaolin Temple and TaGou, the largest Shaolin school in the world, accompanied by China’s top martial historian (Professor Kang Ge Wu) to confirm it. Before they called it “mixed martial arts” the Shaolin monks were already mixing dozens of systems and weapons. There is SO MUCH to teach here that it boggles the mind. Here’s how your start…

Ba Shi (8 Postures) teaches the foundation for Shaolin Qigong training.
Stretches, strikes and exercises. All you need to attend Kung Fu classes.
24 Beats : This is a truly great form. It can be practice alone or with a partner. Once you practice with a partner you don’t have to wonder how each move works.
The Spring Leg Form (Tan Tui): This is a very famous Kung Fu routine originally developed by Muslim Chinese. This gives all the strong basics needed to develop excellent Kung Fu skills.
Self Defense Training: Basic situations are given such as chokes, punches, bear hugs, wrist grabs and other attacks. This level specializes in one-on-one attacks.

Intermediate Level: Chi Kung Postures show the correct alignment of the body, use of breath and control of the intent of each movement.
Snake Hands: Special fighting training utilizing a sensitive touch and quick hands.
Shaolin #6 The Short Strike : This beautiful form begins the training of the ancient Shaolin system.
The Shaolin Staff: Whirling, twirling, cutting and spinning: here’s the first of the Shaolin weapons: the monk’s staff.
Shaolin #7 Plum Blossom Fist: This Shaolin hand form shows angles changes, throws, grabs and kicks.
The Shaolin Saber: This flashing, wrapping and slicing weapon is said to resemble the “movements of a tiger”.
Shaolin #8 Shuffling Fist: Another form practiced for centuries in China with spinning and jumping actions and special kicks.
The Shaolin Spear: This weapon is known as the “King of the Weapons” and when you see it’s speed and flexibility you will know why.
Shaolin #4 Penetrating Fist: This ancient form show the movements of the Ape and the power of the Tiger.
The Shaolin Sword: Without a doubt the most graceful of Kung Fu weapons, so soft it is sometimes called the Tai Chi of Kung Fu.
Shaolin #5 Martial Fist: A gorgeous form with intricate and beautiful hand movements and many turns and twists. 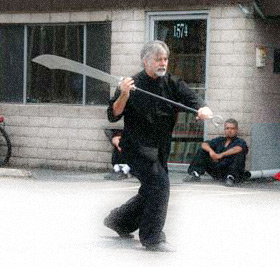 Advanced Level: We don’t go into advanced training on this site because, well, it’s advanced. Suffice to say it centers around Energy Training, Coiling Hands, Opening and Closing and core concepts of authentic Kung Fu. Unusual or specialized training includes Double Weapons, Soft Weapons (such as the steel whip), body conditioning and iron palm training (optional). Some of the lesser known styles we work with are: Baji, Mei Hua (Plum Blossom Fist), Lost Track and other Northern Kung Fu styles. Sparring systems, of which we have many, emphasize sensitivity, transitions from striking to grappling and back, and fighting strategies.

Click here to get CLASS TIMES for Kung Fu